A tourist in my own city

Archive for the category “pop-ups” 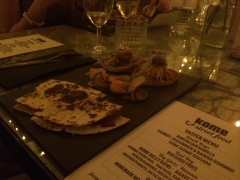 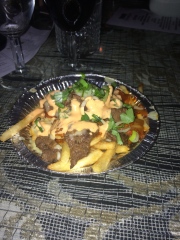 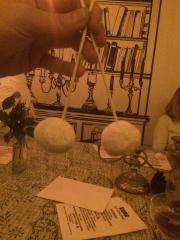 The Dolls house is a great venue on Hoxton Square, this is a really busy, vibrant area near old street station with loads of bars, clubs and restaurants within a five minute walk. With 4 floors and a roof terrace and a small smoking area this was a perfect location for Kome. This 4 night pop up serves LA inspired street food.

We arrived promptly, starving and tipsy for the 9pm sitting with a tag along that they happily accepted although the event was sold out online. The only danger of the later sittings on a weekend is not getting too drunk in the couple of hours between finishing work and having dinner while in a bar.

The starters came and was one slate between two (as a group of 5 this meant extras which was perfect). There was a kimchi quesadilla, which wasn’t very spicy which for the group was probably a good thing but for me i like to know there is chilli on my kimchi, the oshinko (pickle) of cucumber,ginger and carrot which was very refreshing and a tuna tataki tostada.  These were wolfed down in seconds as we were so hungry and there were no complaints from anyone about the taste, just bickering about sharing and who had the larger half.

Next up was the Bulgogi fries, which is fries topped with korean beef, spring onions and coriander with a sauce that was kin to a burger sauce, once again sharing between two so the bitterness from the starters sharing fiasco was still fresh and the bickering continued to the entertainment of the ones who were capable of sharing. I would have happily got through one of these plates on my own as how can fries with beef on not be a winning combination which these most definitely were.

The main event came as a portion each, much to the relief of the two who had almost fallen out over the fries. What arrived was pork belly that had been glazed in agave and had perfect crackling on top of the falling apart and melt in the mouth pork. This was easily in the top 5 pieces of pork belly I’ve had the pleasure of tasting. To accompany the pork there was jasmine sticky rice, thai basil, baby leaves, asian broccoli, pickled radishes, queso fresco, crispy onions, crushed peanuts, salsa verde, sambal and a fried egg on top. When reading the menu online before booking the tickets i thought this was going to be way too much, but when all these were combined it all worked and each mouthful had a slightly different taste profile which kept me very happy. Every component of this dish was excited perfectly and therefor was great on its own and with the other parts. Full marks to the guys for putting that much effort into one dish as well.

Starting to feel quite full and rather tipsy, I was slightly worried about the size of the dessert as i would have to eat what i was given (bad habits from school). Luckily what arrived was a raspberry and hazelnut ice cream balls incased in mochi, which is rice flour and hot water combined to form a pastry that encases the ice cream, this has a pleasant chewy texture that was really nice with the ice cream, the hazelnut was by a long way the best of  the two. It is also the best hazelnut ice cream I’ve had…in fact it was so good one of the group hates nuts, but enjoyed the ice cream which is impressive.

Kome put on a great meal which was a great night out, everyone was so friendly and the service was great. i really don’t have anything bad to say about this, so if you ever see tickets available for a Kome pop up then buy them (after i have mine of course!).

Pig in the woods pop up, Hot house Hackney 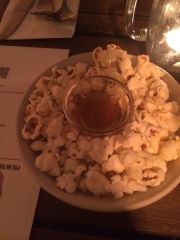 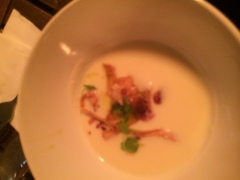 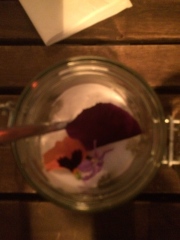 Pig in the woods popped up in the Hot House near London fields station for a 5 course feast, courtesy of the Phantom Pig, who create culinary events all over town.  This time it was on the roof (in a  marquee) of the Hot house. Even better it was only £35 for what you see above, which for what i got, was some of the best food I’ve had in relation to expenditure for a very long time.

Popcorn and caraway butter, arrived quickly on my arrival luckily as i was starving by the time i managed to find the place, and smoked salt butter was really flavourful with the soft sour dough, it was hard to save some for the soup to arrive.  The soup, parsnip, with bacon and white chocolate was sweet and silky smooth with the parsnip still the lead favour through the bacon and white chocolate.

Then onto the Sea Bream, served as a tartar on a smear of grapefruit gel, a sliver of turnip on top and olive oil powder with a winter salad. A very light and fresh dish, with a nice tartar with a bit of acidity and firm bream.

Next up was for me the star of this menu, i would have been happy if i had turned up and been given a huge portion of just this. 42 hour beef shin, horseradish and potato puree, alliums, ash. The smoothest potato puree you could wish for with a subtle horseradish heat, topped with a piece of beef that at no point needed a knife to be used. The beef wasn’t falling apart of its on accord, but as soon as the side of a fork was pressed down a juicy chunk came off. The gravy was a very rich, i assume the braising liquid, and caramelised shallots added a sweetness to the meal.

The palette refresher was ginger beer snow (granita) with cream soda air and flowers, by this point as it was about 10pm it was starting to get a bit cold in the marquee, so although it was really refreshing it was making me a bit to cold to have the whole thing. Although as I’m not a fan of cream soda the ‘air’ was really nice with the gingery ice.

There was nothing on this menu i could even start to complain about and as i said to start the value for money is almost unbeatable. If you ever see a Phantom pig event and can go i urge you to book the ticket and give it a go for yourself, I’m sure you will not be disappointed.

Bell and Brisket serves salt beef in generous quantities inside either a Brick lane bagel or black rye bun.

The black rye bun was really flavourful and very soft, I had the ‘Kount von Kraut’ in the rye which was dill and garlic kraut and melted cheddar. The kraut makes every bite so juicy and with the sharpness from the vinegar in the kraut making a good contrast to the delicate beef, which has great flavour and the melted cheddar adding a richness the pickled fillings cut through so well. On the bagel i had the ‘Viscount Kimchi’ which was kimchi and melted cheddar. The kimchi had a noticeable heat form the chilli which i like, and once again generous amounts of the amazing salt beef. The third one also on a bagel was the ‘Lord Rupert’ which consisted on pickled red cabbage, gherkins and melted cheddar, possibly my favourite combination, as the gherkins, pickled cabbage and salt beef is a combination that can never be bad. Next time i would have this one on the black rye. 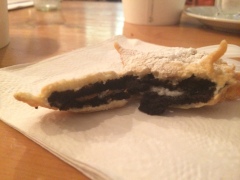 When mac met cheese is a pop up currently at The Russet in hackney. They are serving up various combinations based around, you guessed it, mac and cheese.

I had the macancinis, their Carlos the cactus (mature cheddar, parmesan, mozzarella and jalapeños) mac and cheese breaded and dropped into the frier. The firm crunchy exterior gave way to reveal the oozy mac and cheese with a subtle tinge of heat and fresh jalapeños.

Then Mum’s classic mac and cheese, with bacon lardons,  mature cheddar, red leicester, parmesan and nutmeg. The sauce was thick and rich,  with perfectly cooked elbow pasta. and a crust on top hiding the rich colour front the red leicester. The lardons were crisp and the flavour of bacon will never do anything but add to a mac and cheese!

Then was the deep fried Oreos, an Oreo dipped in batter fried and coated liberally in icing sugar. The Oreo goes soft and the biscuit stars to blend with the cream filling, delicious but i would have felt so guilty if i had eaten more than one.

If you have a craving for mac and cheese, then this is where you should be going, its easily the best i have had in London. 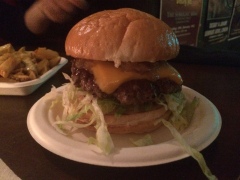 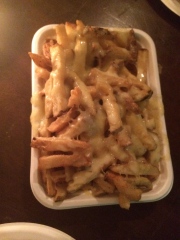 Lucky chip is another one of the burger places that seems to be on everyones top 10 list so it would be rude not to try it out. I went to the Seabright arms to try it out, serving from 6pm with a traffic light which goes green when the kitchen is open (was it the greatest drunken steal of all time?) They are also at Netil market.

The Seabright is a pub i would go to without the burgers, the selection of beers on tap was massive and have a huge board of all their current offerings with the price and abv included. which is handy as they had 10%+ offerings.

I am not sure if the bun is steamed to get it warm or not, but from how soft this bun is i would be impressed if its not. A generous amount of shredded lettuce as well brings a refreshing crunch to each mouthful. I sampled the ‘kevin bacon’ and the ‘lucky burger’ with a cheesy chips side. The cheesy chips weren’t anything to write home about but the burgers were great. Medium patty with ozzy american cheese, the mentioned mound of shredded lettuce, tomato, mustard, ketchup and pickles. The Kevin bacon, as the name suggests it had applewood smoked bacon which was nice and crisp and a very tasty patty i was very happy gobbling my way though. The Lucky burger had Cheese, grilled onions, lettuce, tomato and lucky mayo. I preferred the lucky mayo to the ketchup and mustard and as with the Kevin bacon the bun was really soft and the lettuce plentiful.

I enjoyed these burgers and the Sambrooke’s pale ale that i washed it down with was delicious. Next time i will not be driving so i can take advantage of all the craft beers to sample!